In the second half of 2017, from the iPhone X face recognition on using the laser sensor, the laser has become a super killer in the mobile phone industry. While Apple follows up on drones, lidar has also begun to be hotly debated by the media. It seems that black technology has become indissoluble with lasers. The reason is that the accuracy and accuracy of laser ranging, as well as the sensitivity and stability of user sensing, are the best known in optical media at present. Natural industries have also tried their best to introduce laser applications. 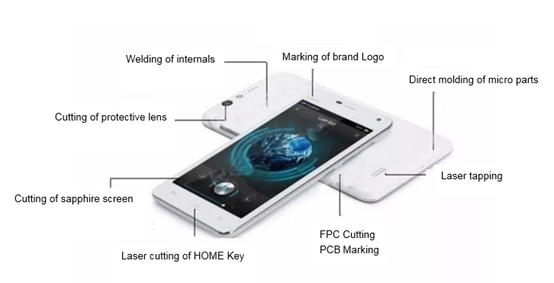 Users are more concerned about product features not the applications of  laser cutting machine manufacturers. Compared with traditional contact cutting machining , laser processing has the outstanding advantages of good cutting quality, high cutting efficiency, and high cutting speed. This type of advantage has already demonstrated the trend of alternative applications in the fields of communication semiconductor industry, consumer electronics manufacturing, and automobile industry which require high precision and high efficiency in manufacturing.

In this article, I talked with you about how the laser cutter are the ultimate killer for mobile phones.

Laser Marking: Each mark on the phone is made by laser device

Laser marking is a method with high accuracy, high speed, and clear marking features, which by high energy density lasers to local irradiation of the workpiece, making the surface material vaporize or chemically change to leave a permanent mark. The use of laser marking as a permanent marker for mobile phones can improve the anti-counterfeiting capability and increase the added value, making the product look higher and more brand-like.

At present, laser marking technology is very mature, with its cheap price, fast processing speed, and good marking quality. It is widely used in the field of mobile phones, mainly in the surface of the logo mark, text mark, and internal electronic components, circuit board Logo, text tag, etc. The marks seen on the phone’s logo, buttons, and case, battery, and mobile phone accessories are currently made by laser equipment.

Laser cutting: hard, ultra-thin material, which can be realized by the laser

Mobile phone configuration constantly updated, the appearance of mobile phones is also in line with the introduction of more new technologies and components, but also with the times, the application of 3D glass, sapphire lens protective film and OLED screen, is typical example. These materials are either ultra-thin, brittle, or harder, so they must be processed with laser technology

The full screen with OLED panels as its main material is currently the mainstream of mobile phones for the next two years. 3D glass is the best choice for OLED panels. Due to the special structure of the 3D glass and the too thin thickness, the traditional cutting method will lead to low yield. The laser cutting technology is processed by non-contact cutting method, so that local temperature rise produces stress, and the stress softens and causes cracks to crack the glass along the laser scanning direction, so that the cutting edge is smooth and flat without cracks. The multi-degree of freedom of laser technology is especially suitable for the machining of curved workpieces, which solves the technical problems of cutting 3D glasses for mobile phones and is the mainstream of brittle materials processing.

OLED panel as an ultra-thin brittle material with a double-sided glass structure, the traditional cutting process will cause the edges to break and collapse. However, Laser can be realized with non-contact processing method for thin glass and ultra-thin glass.

It is very common that laser cutting technology in the current mobile phone manufacturing process. The cutting of the internal structure of the mobile phone generally adopts the UV-ultraviolet laser technology for precision cutting, mainly cutting the FPC soft board, the PCB board, the hard and soft combining board and the cover film laser cutting Opened window and so on. Laser drilling is also considered part of laser internal structural cutting.

Laser drilling with the advantages of high efficiency, low cost, small distortion, and a wide range of applications. It can be used in mobile phone applications for hole punching of PCB boards, earphones for housings, hole punching of antennas, and hole punching of headphones. A palm-sized mobile phone focuses on more than 200 parts. Mobile phone manufacturers require the punching process with the features of fast, good quality, and low cost for in the manufacturing process of mobile phones. There are only the laser focused spot can be concentrated on a wavelength level in a very small area. Highly concentrated energy, especially suitable for processing fine deep holes with a minimum pore size of only a few micrometers. The hole depth and aperture ratio can be greater than 50 microns.

Laser welding:  there is only the laser is competent on metal middle frame and mobile phone parts

Laser welding uses a high-energy-density laser beam as a heat source to melt the surface of the material and solidify it into a whole. There are important indicators for judging the welding process, including heat affected zone size, weld appearance, welding efficiency and so on . Compared with traditional spot welding and arc welding, laser welding has many advantages such as small thermal deformation, high efficiency and good precision, but the current price is relatively expensive and the permeability is low.

The internal structure of the mobile phone is delicate. When connecting by welding, the area of the welding spot is required to be small, and the ordinary welding style cannot meet this requirement. Therefore, most of the welding between the main components of the mobile phone is laser welding. After the stainless steel frame returned to Apple’s mobile phone again, welding became the best choice for the iPhone’s internal midplane and shell connection. In addition to the internal structure of mobile phones, many chip components on mobile phones must also be completed using laser devices.

With using the metal frame structure on Apple, Samsung’s mobile phone, more brand mobile phones have joined the ranks of the metal box. Because some of the mechanical support and shaping capabilities of the glass back cover are weaker than those of metal materials, parts such as cameras still require small metal parts as brackets, and structural small pieces in the metal box can solve such problems. The introduction of small structures means an increase in welding processes. Of course, there is the only laser welding can be sufficient.

Laser etching is mainly laser etching of conductive glass on a mobile phone screen. Its role is to isolate it by a laser etching process on a whole piece of conductive material. This process requires high precision, the human eye cannot recognize and it needs a magnifying glass to see it. His etching accuracy is a fraction of the normal human hair diameter.

LDS laser direct molding technology has been widely used in the smart phones manufacture. The advantage is that the use of laser direct molding technology to mark the antenna trajectory on the mobile phone shell, whether it is a straight line, curve, as long as the laser can reach, it can create 3D effect and maximize the space to save mobile phone, and can be adjusted at any time Antenna track. As a result, mobile phones can be made thinner, more sophisticated, and have greater stability and shock resistance.

Laser application of mobile phone: projection, sensing, focusing can be omnipotent, and it may realize long-distance charging in the future

In addition to the need for lasers to participate in cutting, welding, marking, and other production processes in the manufacturing process of mobile phones, more and more applications are being implemented in mobile phones.

The popular 3D sensing after the release of the iPhone X is mainly applied to its face recognition and a stronger augmented reality experience. In fact, 3D sensing uses a VCSEL laser sensor. Moreover, iPhone X will lead more phones equipped with 3D sensing, will create a 100 billion-class market

The mobile phone records the distance from the target to the test instrument by recording infrared laser light emitted from the device, reflecting through the target surface, and finally being received by the rangefinder. After the LG G3 first used this technology, the iPhone 8, Huawei mate 10, Glory V9, and Moto z2 models all introduced laser focusing technology. However, the application is slightly different. For example, the iPhone 8 uses laser focusing mainly to enhance the AR function.

Fourthly, laser charging. In October 2016, Russia’s “Energy” rocket and Space Company made a special experiment to use a laser to charge mobile phones at a distance of 1.5 kilometers. The experiment was conducted on two buildings, one equipped with a laser emitting device and another installed at a building 1.5 kilometers away, which can convert laser energy into electricity by means of special instruments. Of course, the experiment is to verify the feasibility and the ultimate goal is to charge its cargo spacecraft.

Send your message to us:

Write your message here and send it to us